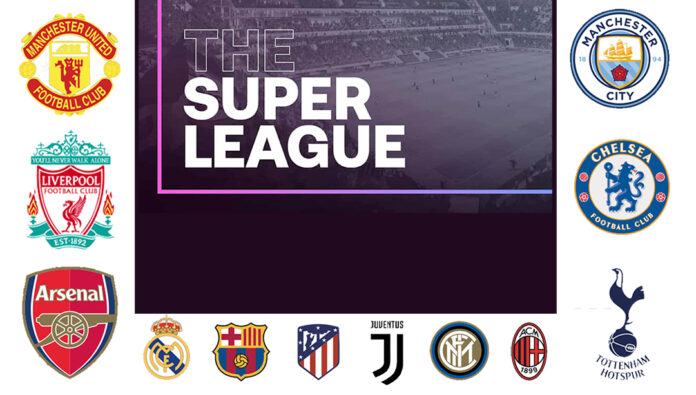 :-  owners of six rebel clubs must all pay price of crimes against football

Following the most extraordinary of weeks in the history of association football, we’re left asking what punishment will there be for the men in suits who tried to steal our game and kill the football pyramid.

Real Madrid’s Florentino Perez clings to what’s left of the breakaway Super League like a Japanese general at the end of World War II refusing to surrender. And no doubt he will make another attempt to disrupt the world order.

Meantime, here in England, it’s time for the Premier League to consolidate its position as the strongest domestic league in world football. And how we move forward is a delicate matter needing skilful diplomacy.

It’s clear the guilty American owners who tried to sell out the Premier League are ringleaders insofar they wanted this attempted coup to Americanize the sport, killing competition and the football pyramid..

Manchester City, Chelsea and Spurs, the other three members of the so-called Big 6, are equally culpable – despite mitigating claims they only went along with it because of the fear of being left behind.

This was not an overnight decision. Perez has publicly admitted these talks started three years ago.

I’ve no doubt that the owners of Manchester United, Liverpool and Arsenal did use the threat of leaving the others behind to bully their Premier League accomplices to join this ill-conceived breakaway.

But that does not excuse this skulduggery of epic proportions. It only supports the argument that there are varying levels of punishment to be dished out.

Personally, I believe this whole episode has proved just how urgent it is for the British government to legislate to protect our national heritage, our national sport, the football pyramid and the interests of the public at large.

Never has there been a stronger argument for fan ownership along the lines of the exemplary German model, which guarantees a controlling 51% in the hands of the supporters who are and always have been the true owners of any football club.

The supporters of English football’s biggest and most popular club will say we’ve been saying exactly this for the past two decades.

Manchester United fans were unable to do anything 16 years ago when the Glazer family leveraged control of the world’s best supported football club. And this latest grubby grab for power had their fingerprints all over it.

The Super League’s six billion dollar start-up loan – £4.3 billion – was being financed by JP Morgan, former employers of one Ed Woodward who helped mastermind the Glazers’ leveraged buy out of Manchester United back in 2005.

It was no surprise that the Glazers recruited Woodward and, once David Gill departed with Sir Alex Ferguson, they eventually made him chief executive of Manchester United.

So far Woodward’s impending departure makes him the only casualty of this attempted coup. But why should Woodward be the only one to pay the price for what Gary Neville described as the “attempted murder” of English football?

The owners of all six English clubs have issued apologies in one form or another. But simply saying sorry is not good enough. There has to be a way to punish the guilty without collateral damage for the players and the managers who were all united in opposition to the Super League fiasco and its threat to the football pyramid.

It is increasingly clear that government intervention is required in any solution and it is encouraging to hear increasing demands for this.

We’ve all heard Boris Johnson threaten a legislative bomb. Sir Kier Starmer has talked about my personal favourite, the compulsary purchase of football clubs. While the Mayors of Manchester and Liverpool, Andy Burnham and Steve Rotheram have launched a united campaign to reclaim our game.

Government action will only happen if the public continue to stand together to insist action is taken.

To understand how this has all evolved, we must consider the other half of this dirty dozen and how Perez has been leading the fight to tackle what he perceives as the threat to his club’s historical supremacy.

The cream of Spain and Italy have long been envious of the commercial juggernaut that is the English Premier League. The EPL financially dwarfs all the other European Leagues combined. And unchecked it threatens to overpower the most powerful clubs in Spain and Italy.

The mighty Italians clubs have already been relegated to second class citizens in the elite world of the superpowers.

Juventus, AC Milan and Inter Milan have long been relegated to the supporting act when it comes to the fight for the biggest prizes in Europe. And the breakaway Super League was their chance to catch up.

Not since Jose Mourinho’s Inter Milan beat Bayern Munich over a decade ago in the 2010 Final has an Italian club been champions of Europe.

Since Sir Alex Ferguson and Manchester United conquered Europe by beating Chelsea in the all English final of 2008, more than 50% of the last 12 finals have been won by Spain . . . Madrid four times, Barcelona three.

Cue the Spanish giants’ desperation to remain all powerful and their reluctance to let the Super League die because it promises them eternal riches to extend their supremacy.

It’s no wonder that Real Madrid’s much maligned President Florentino Perez is still appearing on Spanish television championing the belief that this ill-conceived breakaway has a future.

It’s clear that the financial might of Real Madrid and their El Classico rivals Barcelona has been severely threatened by the covid crisis that has brought them to their knees.

Barca, with debts of 1.1 billion, are most vulnerable and fighting against bankruptcy.

Spain’s fiercest of rivals and sworn enemies are united in their desperation to fuel their ability to continue to rule Europe by monopolising the world’s biggest transfers.

The historical dominance of Real Madrid, the most frequent champions of Europe with 13 European Cups and Champions League triumphs, faces being crippled by unprecedented financial handicaps.

A Super League including England’s elite would kill the dominance of the Premier League as the richest League in the world.

But the ruthless businessmen, who brought their investment bankers’ financial support to this American-empowered treachery, care absolutely nothing about the history and legacy of our national sport. They care nothing about the heart and soul of our football community in England, which provides a rich tapestry to our national identity.

Manchester United fans have known for 16 years how profits and financial gain trumped everything for the Glazers. Since the owners of the Tampa Bay Buccaneers used the now outlawed manoeuvre of a leveraged buy-out to steal control of our beloved football club, they’ve been silent dictators living off the fat of the land they conquered.

While fans love to hate our bitter rivals Liverpool, our owners were gleefully flirting with their fellow American owners of Merseyside’s most famous club. Let no one doubt that when John W Henry and his Fenway Sports Group wrestled control of Anfield from the previous American owners, untold riches were always their ultimate goal.

Of course the same goes for Stan Kroenke when he completed his takeover of Arsenal. The billionaire from Columbia USA knew he was buying history that guaranteed a never ending source of riches.

Arsenal fans are currently dreaming that Spotify’s billionaire founder Daniel Ek will make an offer to buy the club from Stan Kroenke. And it is significant he’s suggested he’s in favour of facilitating a 51% fan ownership model, should he succeed in forcing out the Kroenke family.

But it is hard to see why Kroenke would relinquish his ownership without the pressure of government intervention and the advent of a fan ownership requirement along the lines being demanded by the 50+1 campaigners.

Selling out their premier league partners and the rest of the English football pyramid club was an easy decision for the Glazers, for Henry and for Kroenke . . . because these guys have no emotional ties with the clubs they own. And they simply don’t understand our game and how these clubs are a fundamental part of the rich tapestry built over many generations.

What these Americans do understand is that they currently control our three most famous clubs. Because Manchester United Liverpool and Arsenal are the biggest sporting institutions in England, with the most fans and the richest history.

Their toughest challenge prior to their aborted Super League announcement was how to recruit the super rich duo of Manchester City and Chelsea. These two clubs have owners who desperately want to win and dominate the beautiful game by playing attractive football.

Abramovich the Russian Israeli who bought Chelsea rarely speaks. But we do know how desperately he wanted to win the European Cup. And how he wants his club to entertain on the pitch.

Likewise with Sheikh Mansour and his City project which still chases the elusive goal of being European champions. In the meantime, their transformation of the east side of Manchester is a growing legacy and something to be proud of.

Why did they throw that goodwill away by attempting to join this selfish self-serving breakaway?

I blame the American bullies and that’s why they should receive the biggest punishment for trying to destroy the football pyramid.

But they still committed the crime of trying to kill our football pyramid. and must be punished along with the pathetic owners of Spurs.

Spurs, the annual underachievers, were just delighted to be on board. In all honesty they have the weakest argument for being in the big six.

British owner Joe Lewis and his henchman Daniel Levy were also the odd ones out because they are the only “homegrown rebels” in this attempted breakaway. Albeit Lewis is a tax exile in the Bahamas and not an authentic British owner in the true sense.

So where do we go from here?

A fan ownership model will protect our football clubs from unworthy business people trying to leech money out of our game, wherever they come from.  Provided it’s clearly regulated, of course.

Football fans across the country must stand together to call for government intervention and a fan ownership model. We’ve already heard the Red Knights, who failed to buy out the Glazers in 2010, now support the call for fan ownership. With politicians starting to get the message too, we must keep the momentum going in any way we can by demanding legislation

While we try to move forward, let’s not imagine the threat to our game has disappeared. Our greedy owners will surely revamp their fight for power as soon as they re-group, if their power is not curtailed.

Don’t forget the Super League’s inaugural chairman Florentino Perez knows English clubs will continue to be protected by the might of the premier league if the plot to usurp its power remains dead in the water.

Perez was promised the role of chairman in recognition of Madrid being the No.1 achievers since European competition was born in the 50s.

It also conveniently deflected the spotlight from the American owners who have long desired an elite closed shop that trades in the sporting integrity and dreams of the whole football family,  in return for guaranteed riches.

Do not be fooled. This War is not over. Far from it. People power won the first battle. Now we must kill this threat to our football pyramid. once and for all.

John Gubba - 8th February 2021
0
For the past 63 years Manchester City have respectfully supported Manchester United’s mourning of the Munich Air Disaster in all ways possible.So...