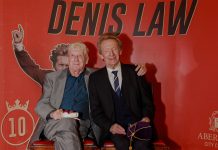 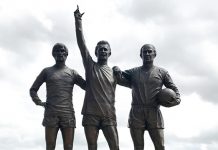 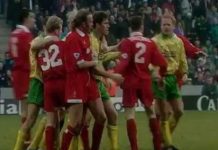 Denis Law – AKA ‘The King’ and ‘The Lawman’ – was finally made a CBE (Commander of the British Empire) in the 2016 New Year’s Honours. The former Scottish footballer, arguably his country’s greatest ever player, has been honoured for his services to football and to charity. Born in Aberdeen on 24 February 1940, Law played for Manchester United between 1962 and 1973, winning league titles in 1965 and 1967 and the FA Cup in 1963. He is one third of the club’s ‘Holy Trinity’, along with Sir Bobby Charlton and the late George Best.
He became the only Scottish footballer to win the Ballon D’or when he was voted European Footballer of the Year in 1964. And he holds the record of 46 goals in one season for the Red Devils.