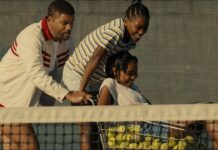 Novak Djokovic has taken tennis to a new high and his breathtaking 4 sets win over Rafa Nadal in the US Open Final is another unbelievable high! Djokovic becomes the US Open champion after four hours and 10 minutes making this his third Grand Slam title of 2011.

“It really seems unreal,” Djokovic said of his victory. “I think most of the strokes are the same that they were in last two, three years. I’m going for it, I’m more aggressive, and I have just a different approach to the semifinals and finals of major events, especially when I’m playing two great champions, Rafa and Roger.

“In last couple of years that wasn’t the case,” he added. “I was always kind of trying to wait for their mistakes or being out there and playing my best tennis and not really having the positive attitude and kind of believing that I can win.”

“Right now I’m all over positive emotions.  It’s really hard to find the words that can describe the feeling that I had and that I have still.  But I know this couldn’t come overnight.  It’s a long process,” he said. “Throughout all my life I’ve been working, being committed to this sport 100 percent. That’s the only the way you can really succeed:  the right balance between private life and life on tour, which is very requiring, demanding.

“But this is something that I love to do, and it brings me joy every single time I step on the court and make a win,” he added. “Nothing can replace that feeling.”